Current Issue Volume No: 2 Issue No: 4

This is a case of a pediatric patient who presented with a sudden onset of right abducens nerve palsy with contralateral hemiplegia with no facial paralysis. With the constellation of symptoms aided by the presence of enhancing pontine mass on magnetic resonance imaging, the presence of diffuse intrinsic pontine glioma (DIPG) was presumed to have caused the findings consistent with the common type of Raymond syndrome.

The objective of this paper is to report a case of a pediatric patient with medial deviation of the right eye associated with left sided hemiplegia, diagnosed as a case of Raymond Syndrome (common type), which is an extremely rare neurologic condition among pediatric patients.

This is a case of a six-year old, female, brought in due to sudden onset, painless, inward deviation of the right eye three months prior to consult. It was progressive and associated with left sided weakness; the guardian denied any history of trauma, previous occurrence, variability nor other systemic symptoms such as fever or weight loss.

On clinical examination, patient was conscious and alert, not in pain nor in respiratory distress. Patient was noted to be dragging her right leg on walking with an inwardly folded right arm. Best corrected visual acuity was 6/7.5 on both eyes with a refraction of +1.00 ( ) -0.50 x 180 on the right and + 1.50 on the left. Anterior and posterior segments of the eye including the optic nerves were unremarkable. A 30-prism diopter esotropia was noted on the right eye. There was -4 limitation on abduction, and on superolateral and inferolateral movement of the right eye on version testing. Abduction deficit of the right eye persisted on duction testing and on doll’s head manuever. A left sided hemiplegia was noted, and the rest of the neurologic findings were normal, with no noted facial asymmetry or weakness. With the constellation of findings, Raymond Syndrome was the primary consideration. 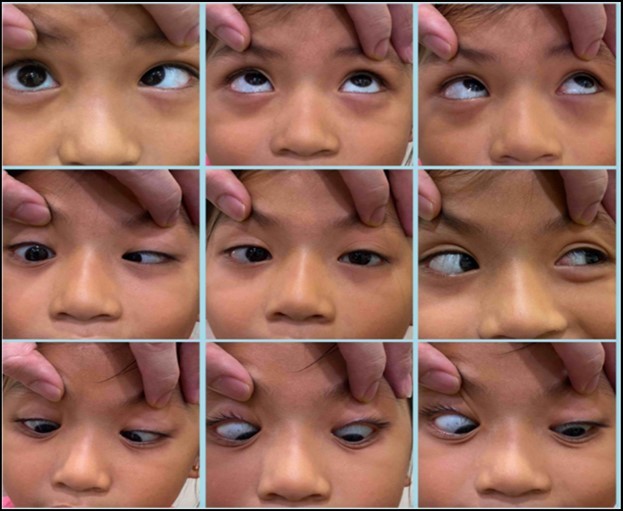 An injury to the ventral pons results to either Raymond and Millard-Gubler syndromes; each can be differentiated generally by the affectation to the facial nerve with Raymond presenting as alternating ipsilateral abducens weakness with contralateral hemiplegia while Millard-Gubler manifesting with ipsilateral facial paresis. However, with the advancement in cranial imaging, neuroanatomical correlation has been widely explored and it was found out that contralateral central facial paresis may also occur at the pontine base as what is seen in the classic type of Raymond syndrome. 3

In general, few cases of Raymond syndrome had been reported 4, 9, mainly of the common type and less of the classic type3. Furthermore, pure Raymond syndrome is an extremely rare neurologic disorder as many structures present along the abducens nerve fascicle may be affected.4

Raymond syndrome is a posterior circulatory stroke syndrome11 mostly affecting adults, however, may also be seen in children. An abducens nerve paresis in a young child raises the suspicion for Diffuse Intrinsic Pontine Glioma (DIPG) since it is regarded as a highly sensitive predictor 7 and magnetic resonance imaging is usually diagnostic.8 DIPG, histologically characterized as astrocytoma, is a fatal brain tumor, accounting for 10-20% in affected pediatric population.10. In this case, Raymond Syndrome brought about by DIPG was a primary consideration on the basis of the presentation of sudden onset of sixth nerve palsy in a young patient supported by the typical radiologic findings consistent with glioma. Furthermore, surgical debulking is a challenge because of its eloquent brainstem location, making radiation therapy the only proven treatment in prolonging progression-free survival.5

This is a case report of the common type of Raymond Syndrome in a pediatric patient, manifested as ipsilateral abducens nerve palsy with contralateral hemiparesis, without an accompanying contralateral facial paresis brought about by a large pontine mass.