Current Issue Volume No: 2 Issue No: 4

A 75 year old, Filipino, male, known hypertensive for 10 years, but not compliant to medications, presented with a sudden onset binocular horizontal, diplopia and bilateral exotropia associated with dizziness. No other symptoms like slurring of speech, body weakness, numbness were noted. Primary gaze exotropia, abduction nystagmus, gaze evoked vertical nystagmus were also noted. Imaging was done which revealed hypodense focus in the subcortical region of the right centrum semiovale extending to the right corona radiata, with unremarkable orbits, midbrain and pons findings.

WEBINO was still considered even without the presence of a pontine lesion in the imaging. The patient was advised patching and was asked to follow up after a month.

Wall Eyed Bilateral Internuclear Ophthalmoplegia results from bilateral damage of the Medical Longitudinal Fasciculus in which both eyes are unable to adduct, convergence anomaly may or may not be present, nystagmus of the abducting eye, and vertical gaze impairments. The most common causes of WEBINO are Demyelinating disease, Cerebrovascular disease and infectious process. Seen in 33% of INO cases. Currently there is no published case report of a px with WEBINO in the Philippines.

A 75 year old male, Filipino, known hypertensive for 10 years but was not compliant to medications, no other known comorbids presented with a 3 hour history of sudden onset, binocular, horizontal, non progressive diplopia with bilateral exotropia associated with dizziness.

No other symptoms like slurring of speech, muscle weakness, numbness, fever, weight loss, confusion, change in sensorium were noted. The patient was immediately brought to a nearby primary hospital and was noted to have a 200/100 blood pressure. He was given an unrecalled drug and was referred to a tertiary hospital.

At the emergency room of the tertiary hospital, the patient had persistence of the diplopia and dizziness. The initial impression at that time was Cerebrovascular Infarct, thus a Plain Cranial CT Scan was done (conducted 6 hours after the onset of symptoms), which revealed a hypodense focus in the sub-cortical region of the right centrum semiovale extending to the right corona radiata, orbits, midbrain and pons were all normal. (Figure 2 and Figure 3)

The patient was then referred to the Ophthalmology Service at the ER level. At that time the VA of the patient was 6/10 on both eyes, unremarkable anterior segment findings with an NO4 NC4 cataract for both eyes and unremarkable funduscopic findings.Patient had bilateral exotropia in primary gaze with the pupillary light reflex on the nasal limbus of both eyes on Hirschberg. (Figure 1). Patient had bilateral adduction deficits in both version and duction tests.Other cranial nerves were intact.

Motor and Sensory findings were also normal. He was advised patching to lessen the diplopia and was admitted by the Internal Medicine Service as a case of CVD infarct and was started on anti-platelet and cholesterol lowering drugs. 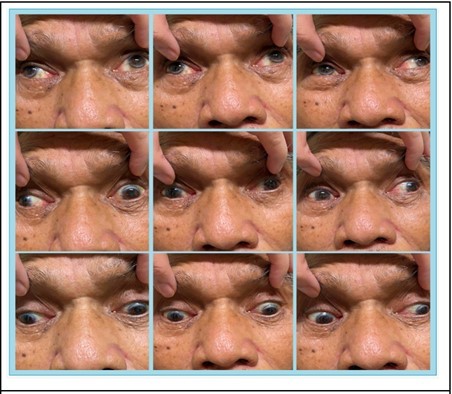 Figure 2. There was persistence of bilateral adduction deficit on duction testing

Figure 3. No convergence of both eyes were noted 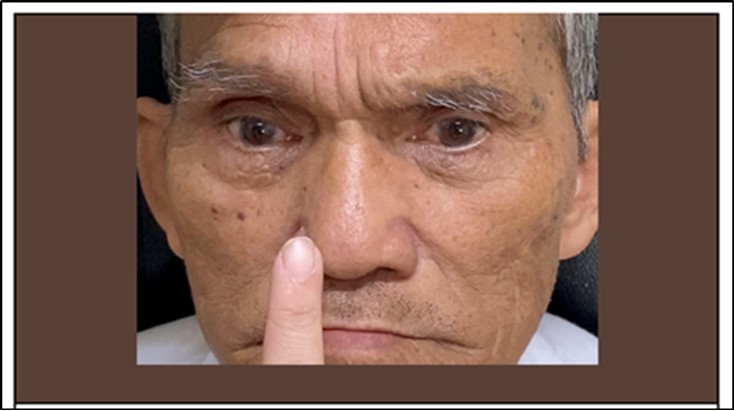 The patient was referred back to Ophthalmology service after 4 days. The patient was conscious, coherent, oriented to three spheres, wheel chair borne. At this time, there was persistence of diplopia but there was no dizziness. The BCVA of the patient was 6/7.5 both eyes. Ishihara was 14/15 for both eyes, with persistent bilateral exotropia in primary gaze. Exotropia was measured at 30 prism diopters on Krimsky and unchanged bilateral adduction deficits in both version and duction tests. (Figure 4)

Figure 4. Cranial CT Scan plain, axial of the patient done 6 hours after onset of diplopia, shows a hypodense focus in the sub cortical region of the right centrum semiovale extending to the right corona radiata 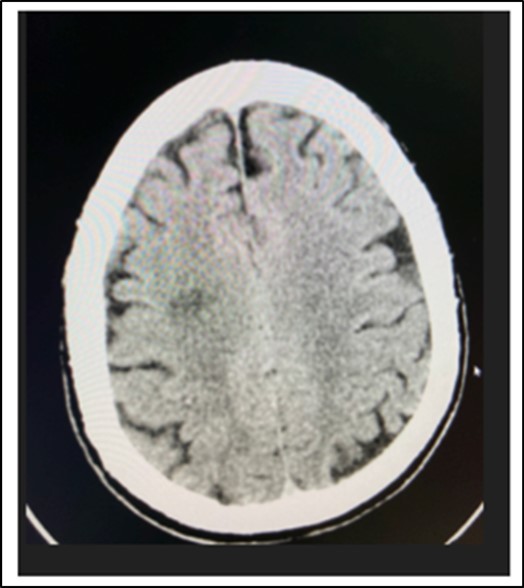 Horizontal nystagmus of the abducting eye and gaze evoked vertical nystagmus on both eyes were noted. (Video 1 and 2) The adduction deficit was not overcome with either doll’s head maneuver and with an accomm dating target. (Figure 5) Forced duction testing was done and there was no restriction on both eyes noted. 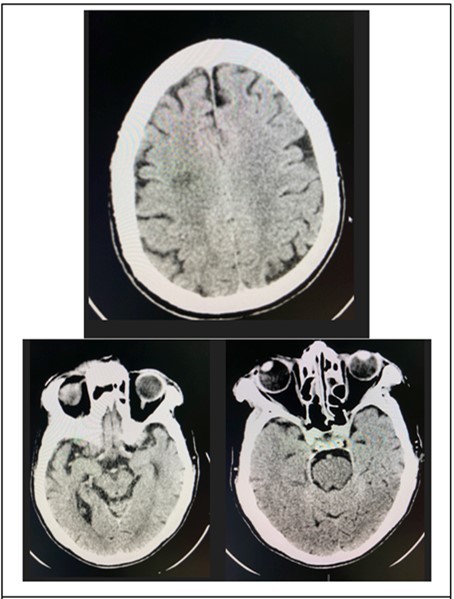 Anterior chamber findings were the same with the initial findings in the emergency room, as with the repeat Neuro examination done.

Cranial MRI plain and with contrast was requested by the ophthalmology service to further investigate on the brainstem. The subsequent study done 21 days after onset of symptoms, revealed patchy bright flair signals were noted in the subcortical white matter and periventricular area. (Figure 6) The orbits, midbrain, pons were regarded as unremarkable.

Figure 6. It showing T2 weighted, axial MRI scans at the level of the lateral ventricles, revealed patchy bright flair signals were noted in the subcortical white matter and periventricular area. 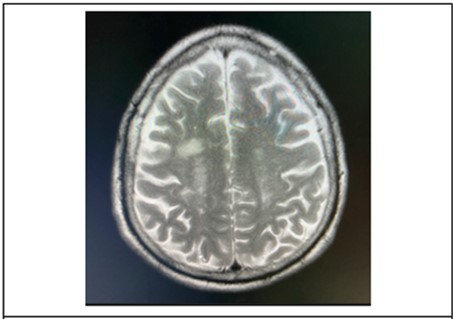 Our elderly patient presented with bilateral adduction deficits with no related muscle weakness or paresthesia associated with a demyelinating disease. However, he had uncontrolled hypertension, poorly compliant to medications and with cerebrovascular infarcts noted in both CT Scan and MRI, as described above.

WEBINO was considered in our 75 year old patient who presented with bilateral exotropia on primary gaze, bilateral adduction deficit with preserved abduction, vertical and torsional eye movements despite no demonstrable neuroimaging findings in the brainstem.

According to a study done by Bolanos, et al. 30% of patients with internuclear ophthalmoplegia showed no compatible lesions in imaging but there were other lesions noted in the other areas in the CNS which helped confirm the diagnosis. They concluded that it is possible that the lesion is too small to be detected.3

Abduction nystagmus can be attributed to Herring’s law of equal innervation, in which there is increased innervation of the medial rectus to compensate for the paresis, with accompanying increased innervation to the lateral rectus of the other eye causing the nystagmus while it abducts. Vertical nystagmus can also be seen since the vertical pursuit pathway may be affected as it ascend from the vestibular nuclei through the Medial Longitudinal Fasciculus.4

Ophthalmologic management of INO is based on identifying the underlying cause and also focuses on eliminating or decreasing the diplopia. Patients can be advised that the diplopia usually resolves in about 2-3 months even without intervention. Management of the residual diplopia after 3 months include the use of prisms, Occlusion Therapy, Botulinum Injection and Strabismus Surgery. 3, 5

Although, no demonstrable pontine lesion was seen via neuroimaging in our patient, WEBINO was still considered since there are noted lesions in the other part of the CNS.

Ophthalmologic management focuses on the management of diplopia, which itself may add more morbidity to the case.