Current Issue Volume No: 2 Issue No: 2

Cardiovascular diseases (CVDs) are one of the leading cause of death worldwide 1. According to world health organisation (WHO) reported that approximately 17.9 million people died due to CVDs per year, in which specifically more than 75% death occurs in the low and middle income countries, and 80% death are due to heart attacks and strokes 2. Oxidative stress is a result of an imbalance between reactive oxygen species (ROS) and the antioxidant defense system. Superoxide dismutase (SOD), glutathione peroxidase (GPx), and catalase (CAT) are 3 major antioxidant enzymes in humans 3. The antioxidant defense systems in the body can manage the optimal levels of ROS physiologically with the help of antioxidant enzymes (AOEs) such as, cellular and mitochondrial SODs, CAT, and GPx; as well as lipid peroxidase (LPO) and myeloperoxidase (MPO), etc. 4. These antioxidant enzymes form the first line of defence against free radicals; hence, the regulation basically depends upon the oxidant status of the cell. Besides, some other factors also plays major role in their regulation, such as the enzyme-modulating action of various hormones including prolactin, growth hormone, and melatonin. Such factors may also stimulate various antioxidant enzymes by increasing their activity or by stimulating the gene expression for these enzymes 5. Therefore, in order to study the change in functional antioxidative biomarkers in serum and other tissues like heart and kidneys in presence of NG-nitro-L-arginine methyl ester hydrochloride (L-NAME) and high fat diet (HFD)-induced cardiovascular disorders in Sprague Dawley Rats, a novel test formulation was designed with the combination of vital minerals (selenium, zinc, iron, calcium, copper, and magnesium), essential vitamins (cyanocobalamin, ascorbic acid, pyridoxine HCl, vitamin B9, and cholecalciferol), and nutraceuticals (β-carotene, Ginseng, cannabidiol isolate (CBD)). All the minerals and vitamins used in the test formulation have significant functional role to provide vital physiological roles 6, 7, 8. Besides, cannabidiol itself has wide range of pharmacological profile and has been reported to role in different disorders 9, 10, while ginseng extract is regarded as the one of the best immune booster for overall immunity antioxidative activity 11. The present study was aimed to evaluate the antioxidative potential of the Biofield Energy Treated Proprietary Test Formulation and Biofield Energy Treatment per se to the animals on L-NAME and high fat diet (HFD)-induced cardiovascular disorders in sprague dawley rats using various functional biomarkers in serum and tissue (heart and kidney) homogenate.

Randomly breed maleSprague Dawley (SD) rats with body weight ranges from 200 to 300 gm were used in this study. The animals were purchased from M/s. HYLASCO Biotechnology (India) Pvt. Ltd., India. Animals were randomly divided into nine groups based on their body weights consist of 15 animals of each group (at the time of induction period) and 10 animals of each group (at the time of treatment period). They were kept individually in sterilized polypropylene cages with stainless steel top grill having provision for holding pellet feed and drinking water bottle fitted with stainless steel sipper tube. The animals were maintained as per standard protocol throughout the experiment.

Preparation of Sample for ELISA assay

At the end of the treatment of 8th week of the experimental period, all the animals were individually subjected for blood collection using retro-orbital route and the blood was collected in the plain vial in all the animals of different experimental groups. The serum from all the groups was stored at -20°C for further estimation. Alternatively, aliquot all the samples and store samples at -20°C or -80°C. After organ collection animals were humanely sacrificed to collect heart and kidney portion that was homogenized and subjected for the analysis of catalase using suitable ELISA method. Avoid repeated freeze-thaw cycles, which may alter the level of antioxidant level in tissues during final calculations.

Estimation of Antioxidant in Serum and Other Tissues

The serum from all the groups was subjected for the estimation of level of antioxidants such as SOD, GPx, LPO and MPO, Oxidized LDL, along with Catalase in heart and kidney tissue homogenate. All the antioxidative biomarker panel was estimation using ELISA method as per manufacturer’s recommended standard procedure. This was a quantitative method and the principle was based on the binding of antigen and antibody in sandwich manner assay.

Figure 2. The effect of the test formulation on the level of Serum glutathione peroxidase (GPx) in Sprague Dawley rats

Figure 3. The effect of the test formulation on the level of serum Lipoperoxidase (LPO) in Sprague Dawley rats.

Figure 4. The effect of the test formulation on the level of serum Myloperoxidase (MPO) in Sprague Dawley rats. 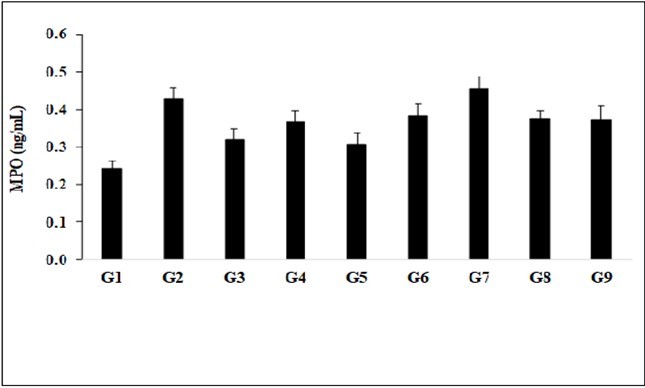 Figure 5. The effect of the test formulation on the level of serum oxidized low density lipoprotein (LDL) level in Sprague Dawley rats. 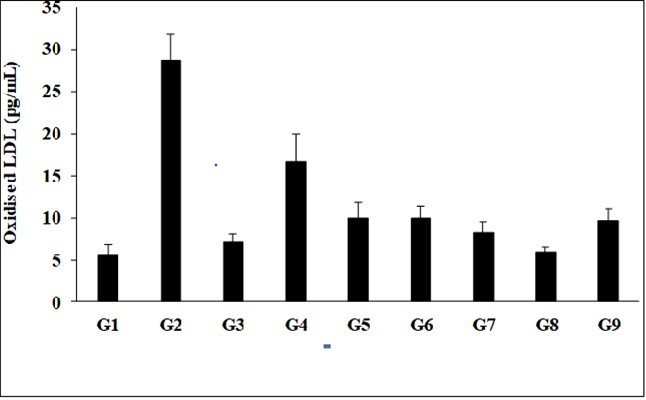 Estimation of Catalase (CAT) in Heart

Figure 6. The effect of the test formulation on the level of catalase activity in heart tissues in Sprague Dawley rats.

Estimation of Catalase (CAT) in Kidney

Figure 7. The effect of the test formulation on the level of catalase activity in kidney tissues in Sprague Dawley rats 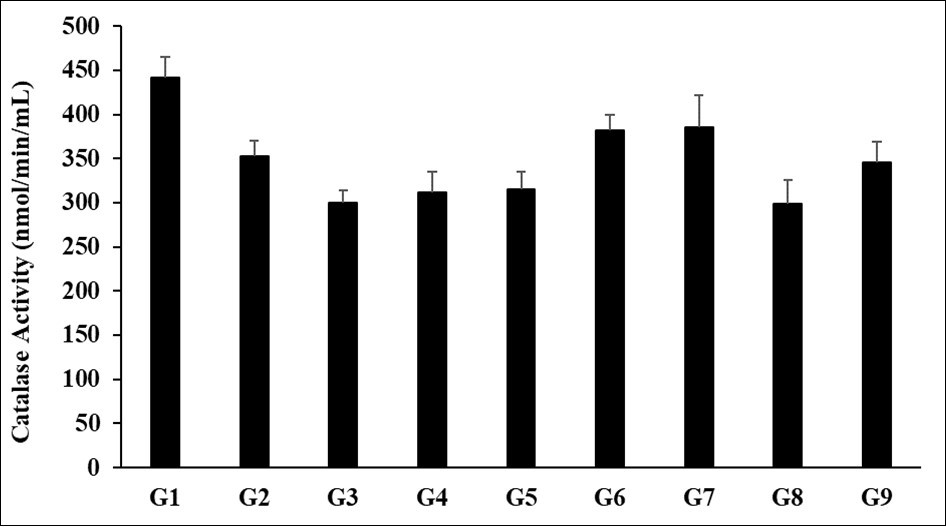 Experiment includes four preventive maintenance groups (G6, G7, G8 and G9). The findings showed the significant slowdown of cardiovascular-related symptoms and also reduced the chances of disease susceptibility. Based on the overall data, it suggests that the Biofield Therapy was found to be most effective and benefited to protect from the manifestation of the existing aliments that will ultimately improve the overall health and quality of life in human.

The authors are grateful to Dabur Research Foundation, Trivedi Science, Trivedi Global, Inc., and Trivedi Master Wellness for the assistance and support during the work